Gentlemen always know how to dress tastefully. As you would expect from men with fine taste, each event has a specific dress code and style always needs to be flawless. No matter the situation, style is always the key: for instance, driving gloves are great for racing and bow ties are great for evening events. A gentleman needs to be able to adapt to various situations while never skipping a beat. Take this 300 SL Roadster for example: What once began as a successful racing car is now a timeless GT. The first of its kind in a series of iconic models have given inspiration, among other things, to the patterns we have chosen for The Signature Wheel collection of bow ties and pocket squares, that pay homage to its distinctive wheels. The 300 SL is one of the ultimate super sports cars of the 1950ies and if not the most famous Mercedes of all time: the “Super Leicht”, the most revered Benz of all. It was a sensation back when it was introduced to the public in 1954: It was the “jet set" favourite transport and only God knows how Hollywood stars love to show off the prodigies of Gullwing doors. However, judging the 300SL as only a GT made to impress would be a huge mistake: this automobile was born as a racing car. The roots of this legendary Mercedes are in the 300 SL W194 racing car of the early fifties, a revolutionary tubular frame clothed in aluminum and powered by a 3 liter straight 6.
The W194 was developed by Chief Engineer Fritz Nallinger and designed by Rudolf Uhlenhaut around a revolutionary and ultra rigid space frame chassis clothed by an all-aluminum body. This super light construction, was the aspect that gave the SL its name: Super Leicht. This lightweight chassis with had the advantage of being incredibly rigid and made the W194 one of the most revolutionary and successful race car design of post war. Due to the high lateral tubings it was impossible to fit conventional doors: cutting the structure to fit regular doors would have compromised overall rigidity. You may be surprised that the famous Gullwing doors were actually "invented" out of mere necessity and the need to win races. They were never conceived as a mere stylistic element. In total, Mercedes Benz built eleven W194's, and many of these were campaigned successfully in races all across the Globe. The Carrera Panamericana, the Mille Miglia, Le Mans, Sebring… you name it, the 300 SL scored a victory. The successes of the 1952 season and the unbeatable status achieved by the W194 made Mercedes' Board of directors decide not to race in the 1953 season. However, the 300 left a mark on car enthusiasts and it gathered the attention of wealthy customers who demanded a 300 they could put in their garage.
Under the pressures of Max Hoffman, Mercedes' importer for the American market, the "Super Leicht" was finally developed as a road car. Both a the Gullwing coupe and the Roadster were confirmed for production under the internal name "W198" and made available for purchase in the first half of 1954. The car you see here is W194 chassis 00009/52, one of the original 1952 cars and the ninth built. Before becoming the prototype of the 300 SL Roadster, this car came second at Le Mans 1952 and won outright, in "barchetta" form, the Nurburgring race in the same year and participated at the Carrera Panamericana. After its last outing at the Glossglockner Grand Prix in 1953, it was later assigned in 1954 to the R&D department of Mercedes, in order to be transformed into the 300 SL Roadster we all know and love. The car was stripped of its aluminum body and fitted with the gorgeous steel one designed by Rudolf Uhlenhaut. Being an experimental vehicle it featured few details that differed from the production Roadster: a taller nose, a curved front grill-logo and unique and bespoke parts from the engine, which was the same 3 liter W194 spec racing unit. This 300 is officially an ex works W194, a racer which carefully put its racing overalls in the wardrobe to fit the bespoke gentleman clothing. Although the “Gullwings” were gone, this Mercedes was ready to fly off to high speed runs in glamorous Mercedes-Benz style, forever to be remembered by enthusiasts all over the world.

Impeccable style and with some to spare: no gentleman would dare come close to this car without an outfit equally as impecable. In the gallery below, the exceptional design of the mercedex-benz is displayed along with the accessories of the outlierman collections. 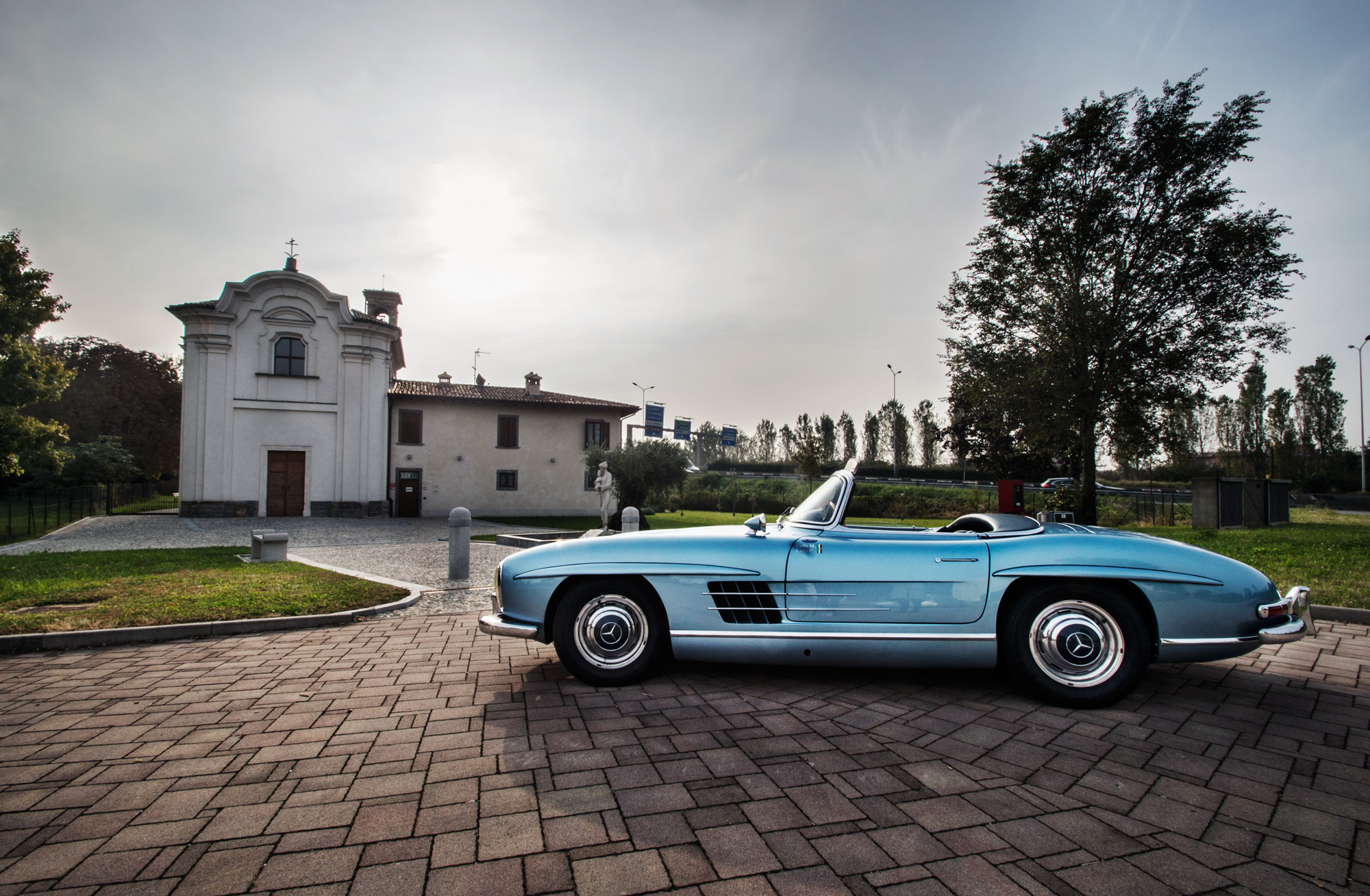 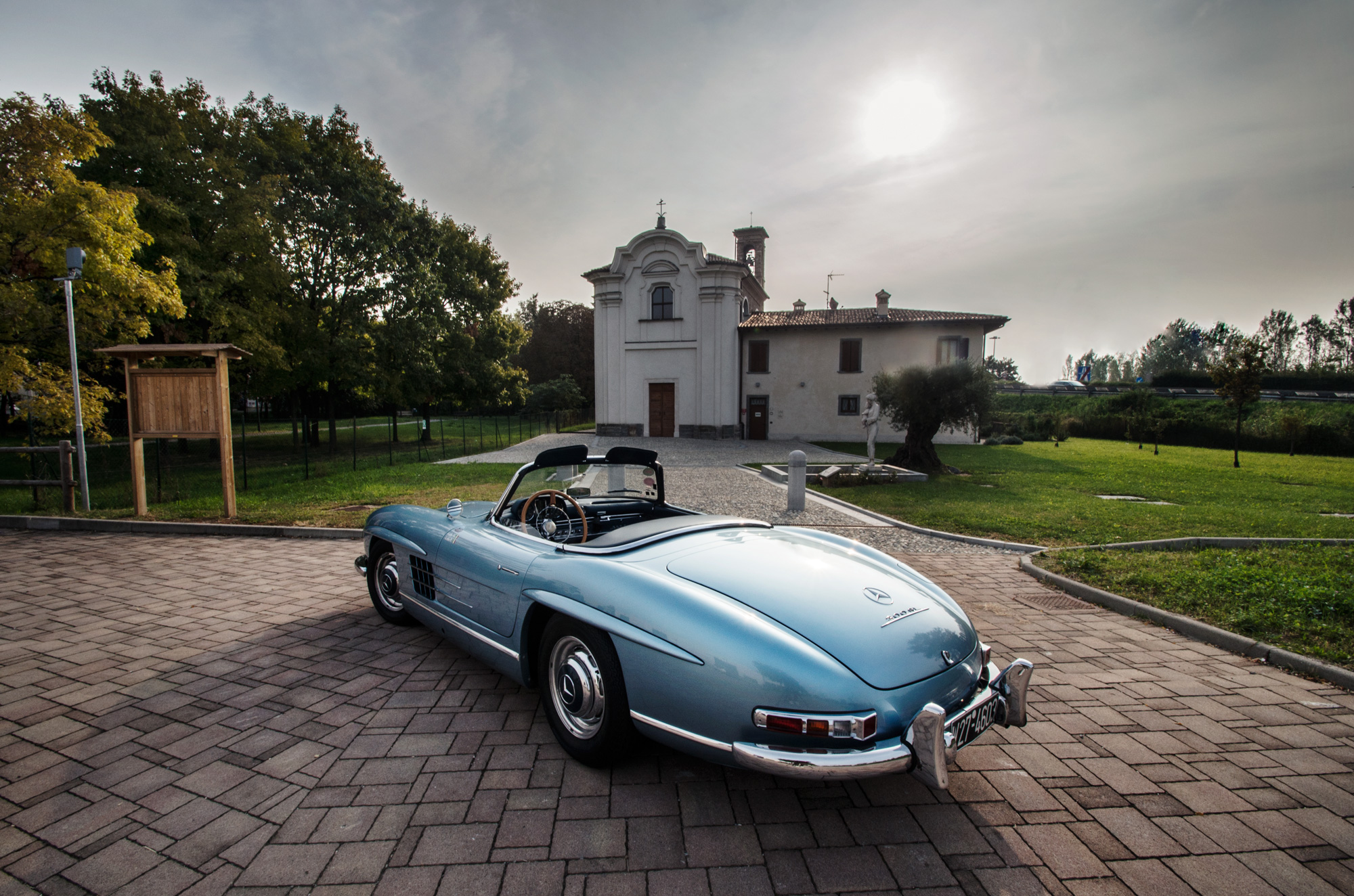 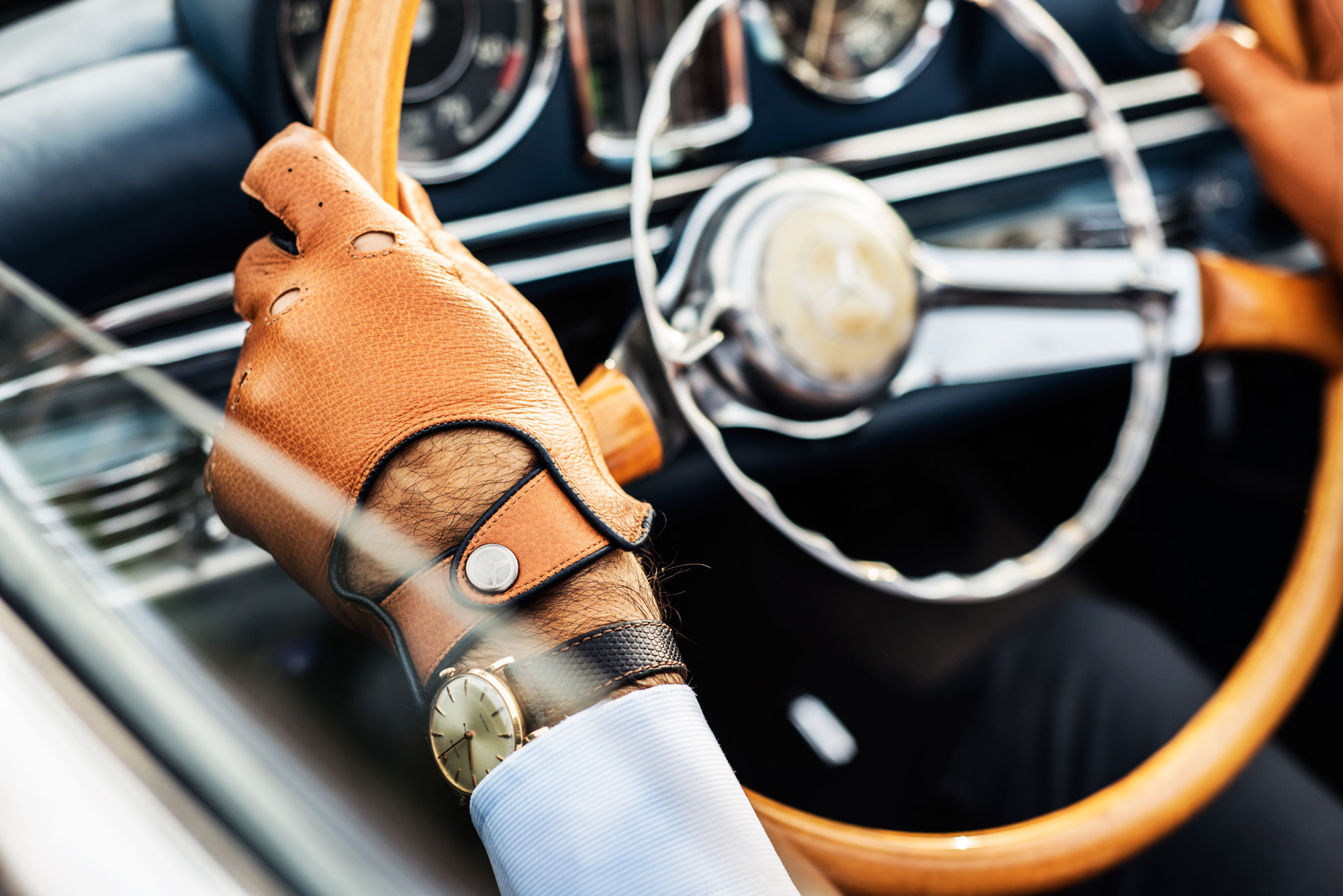 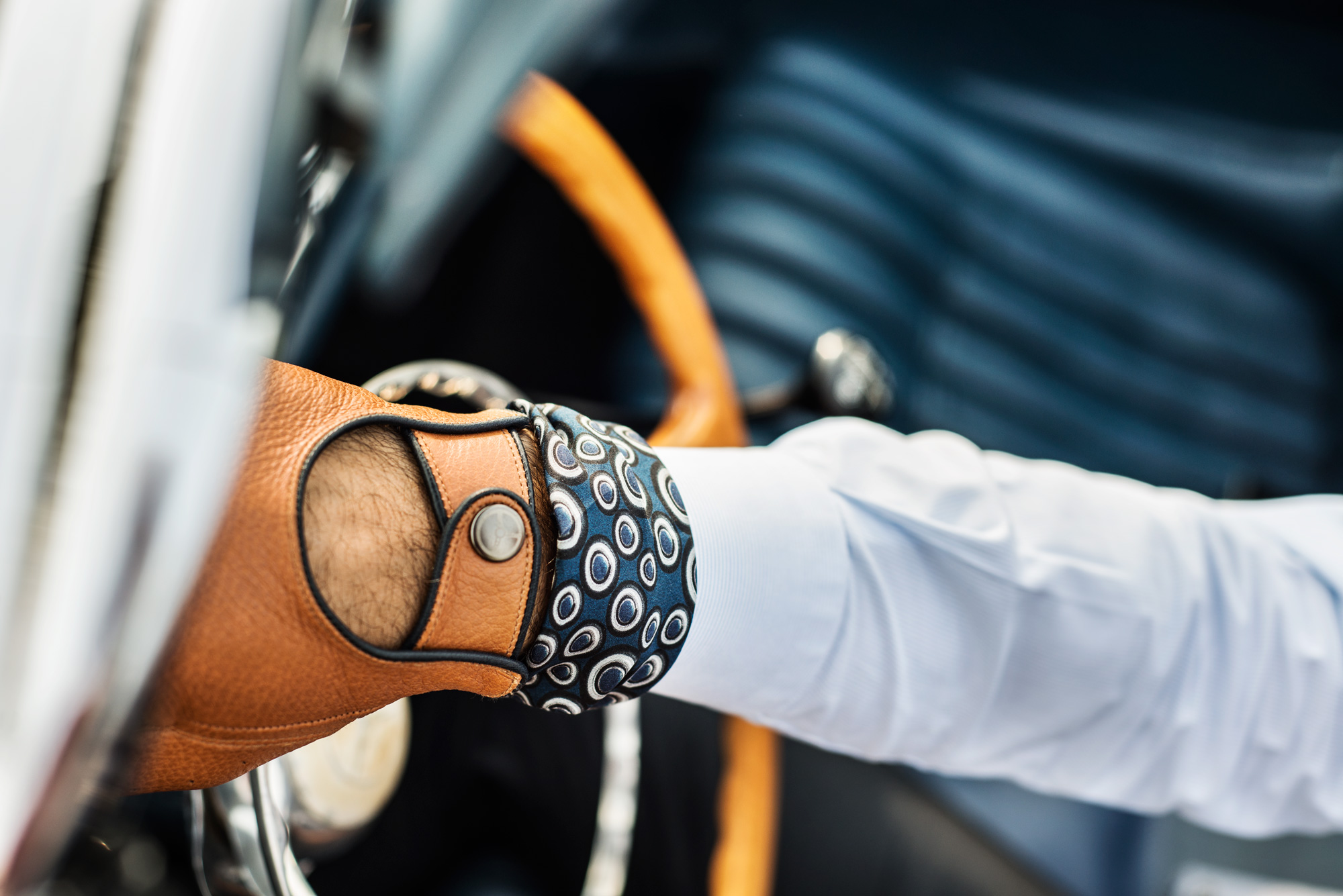 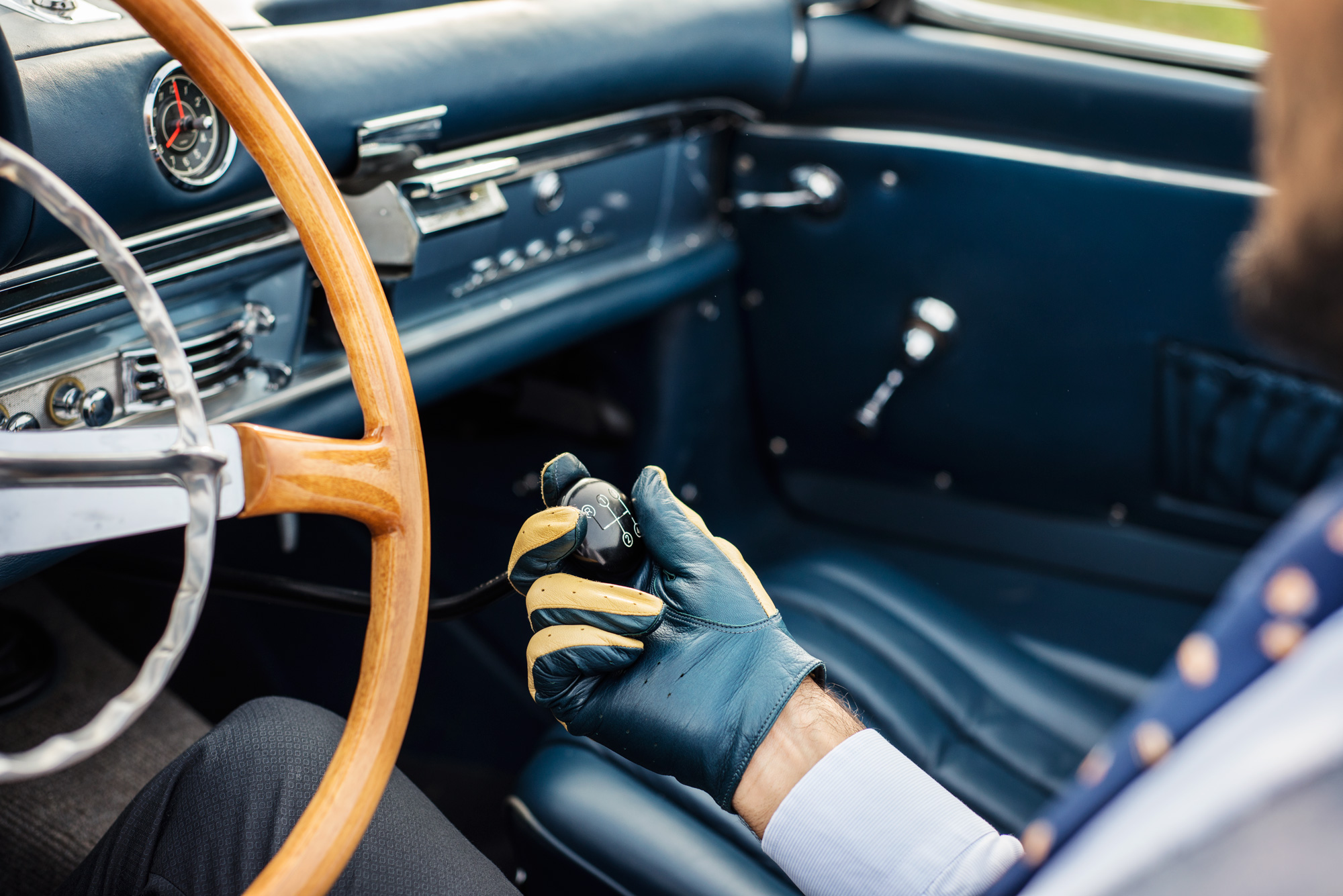 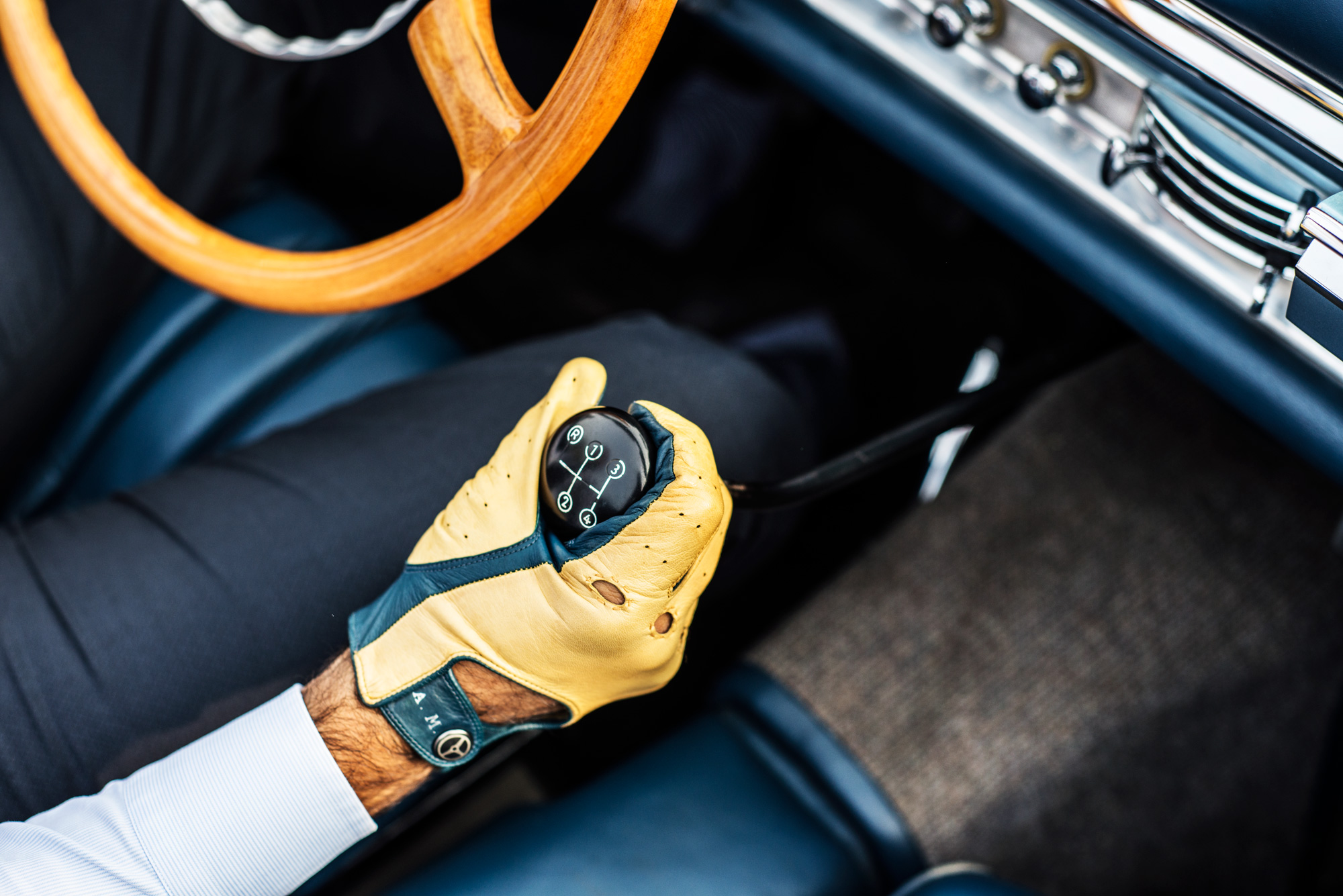 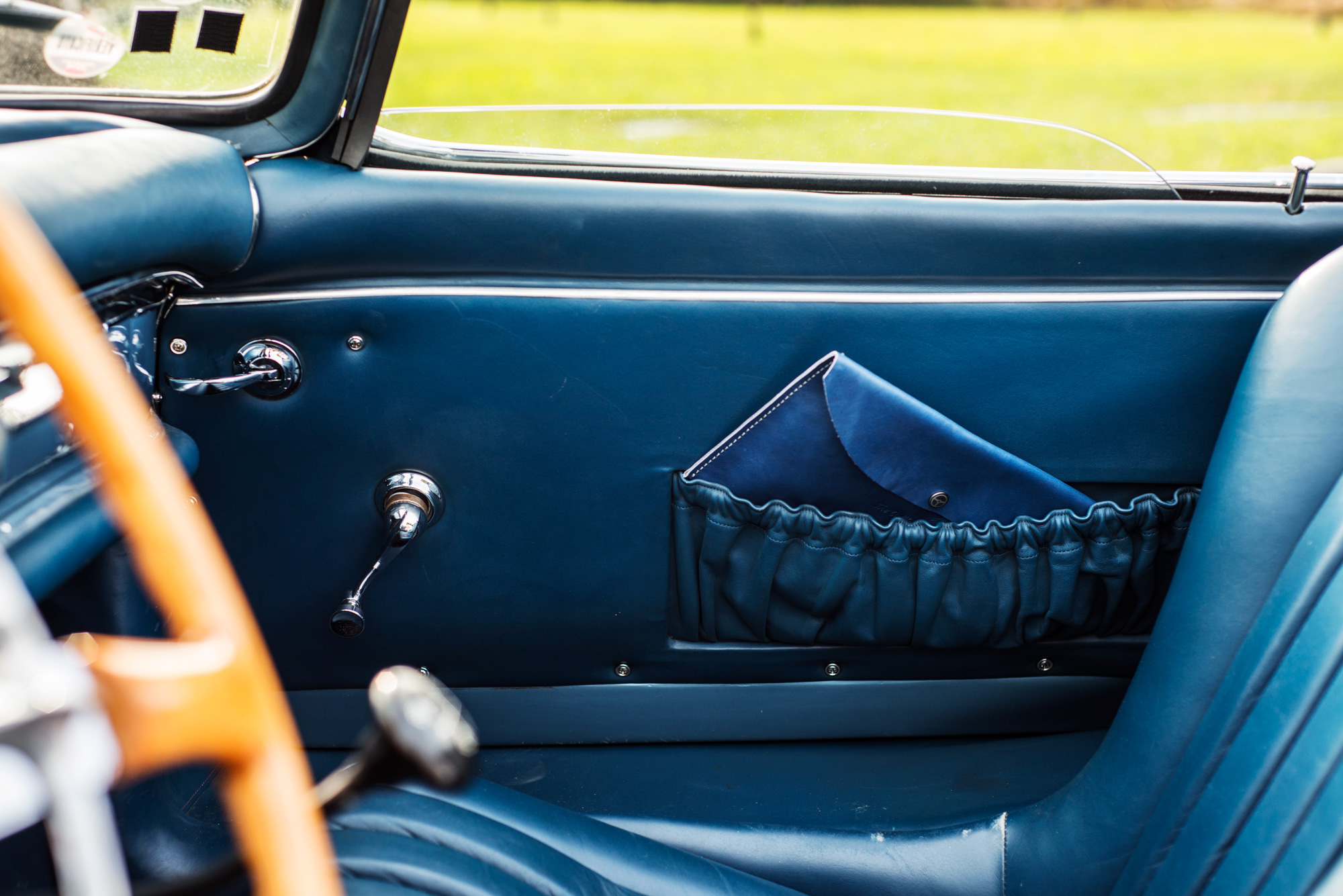 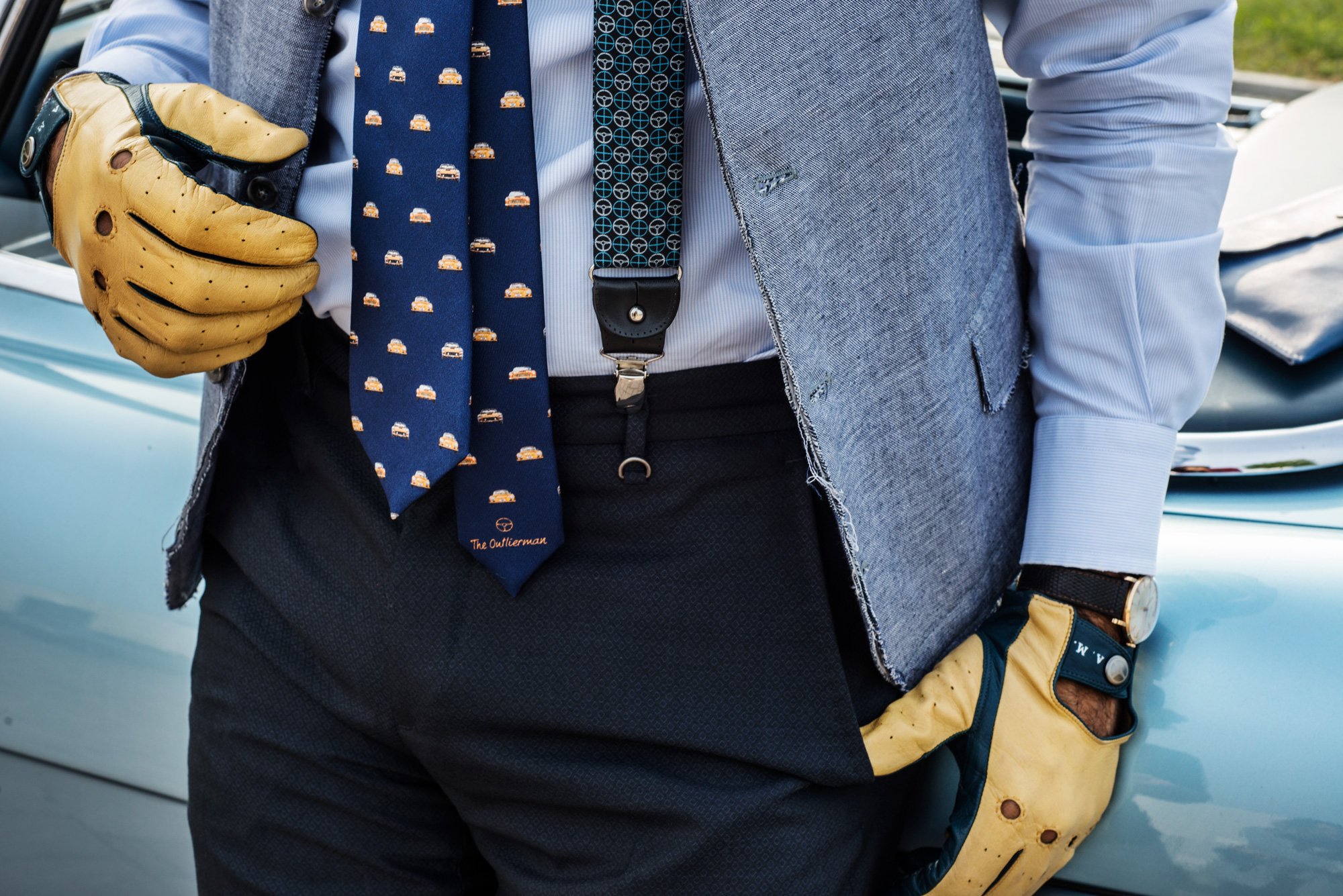 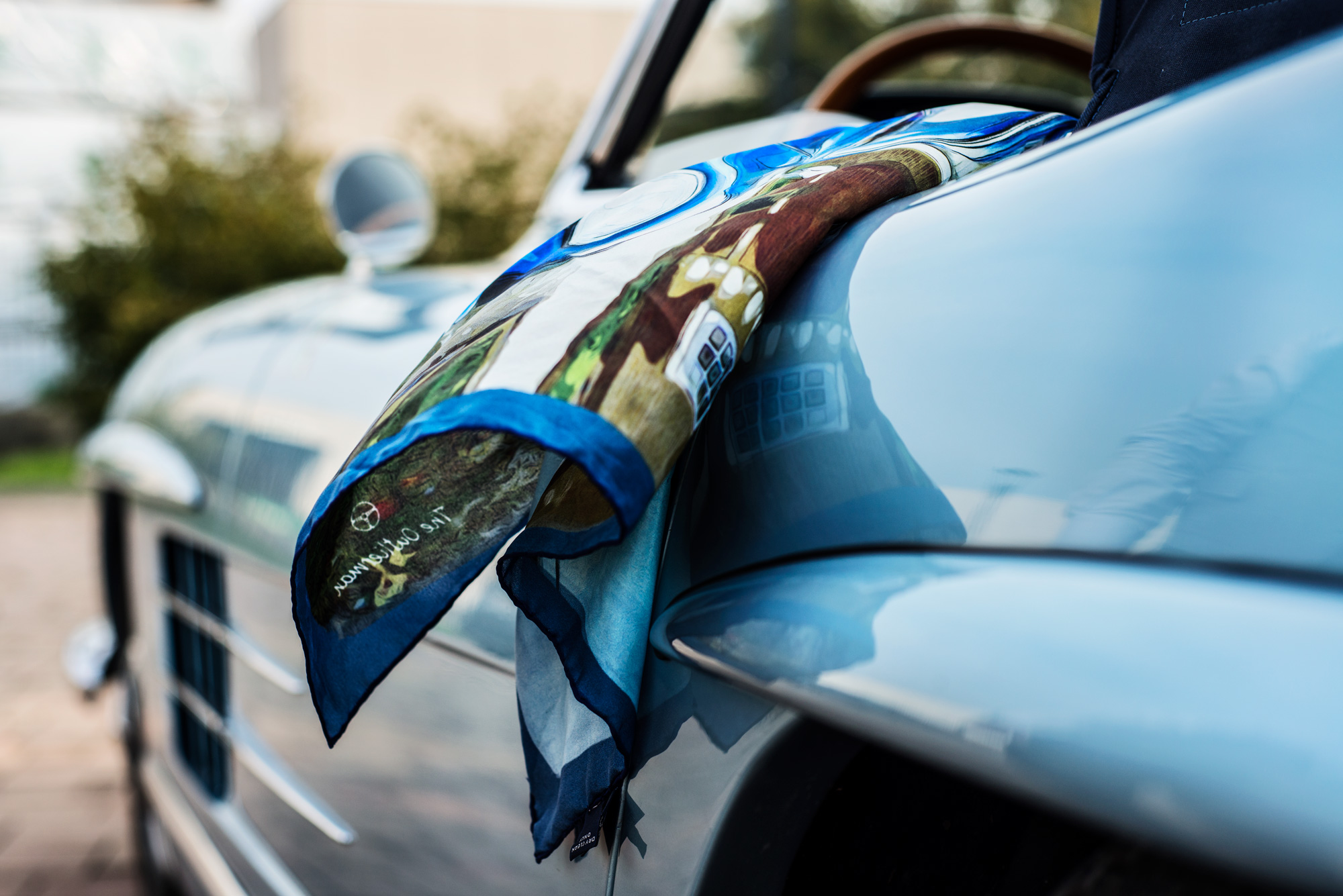 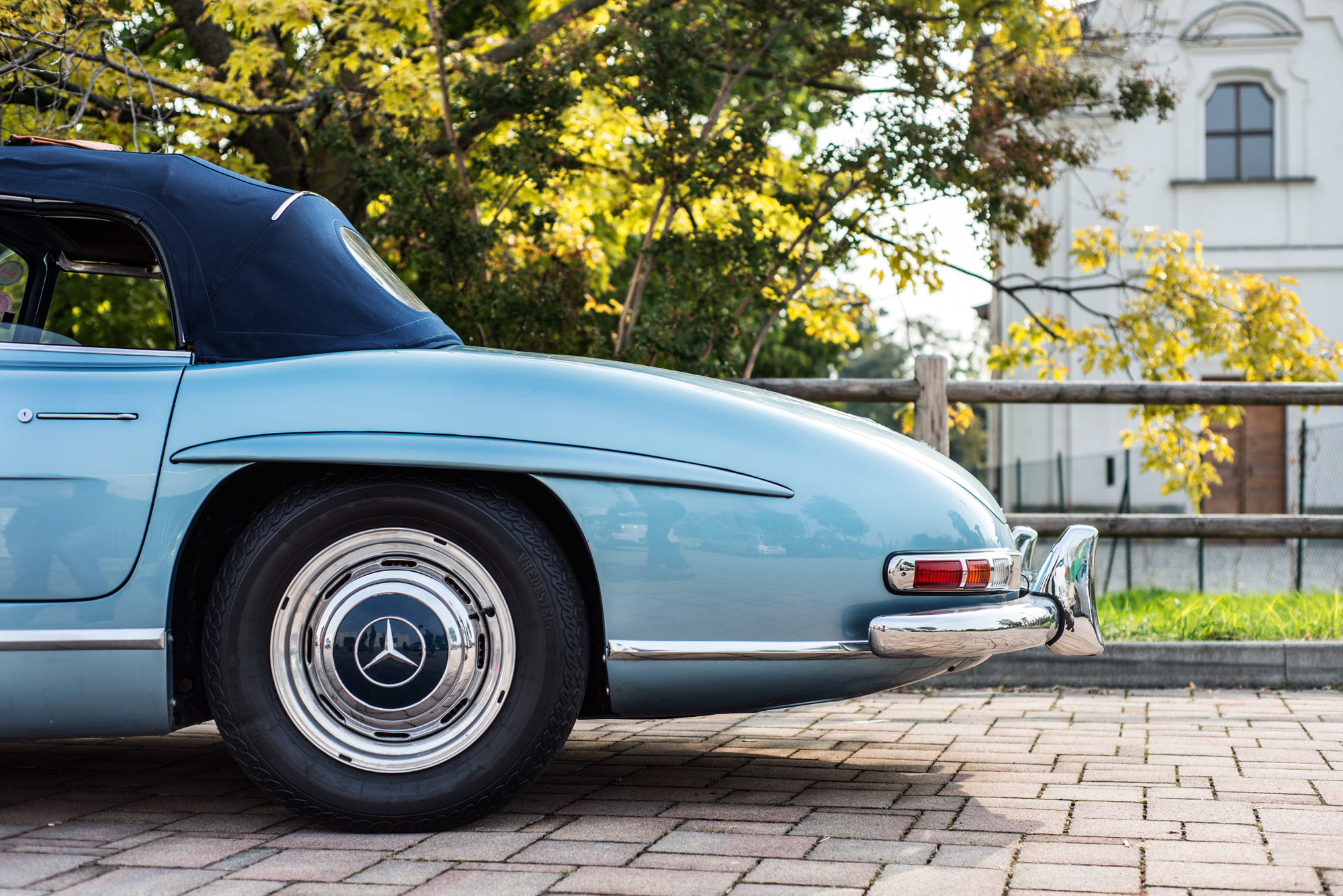 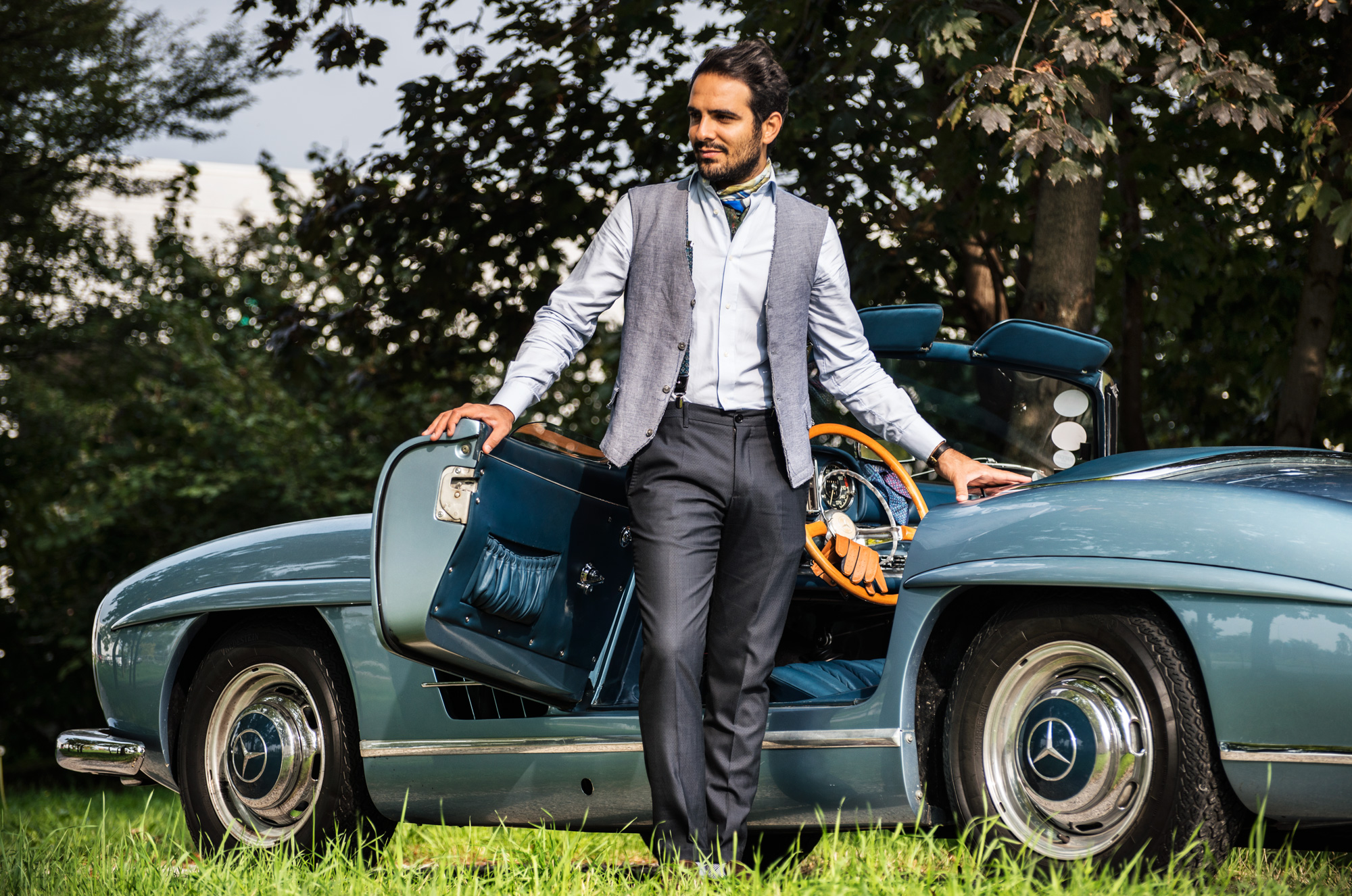 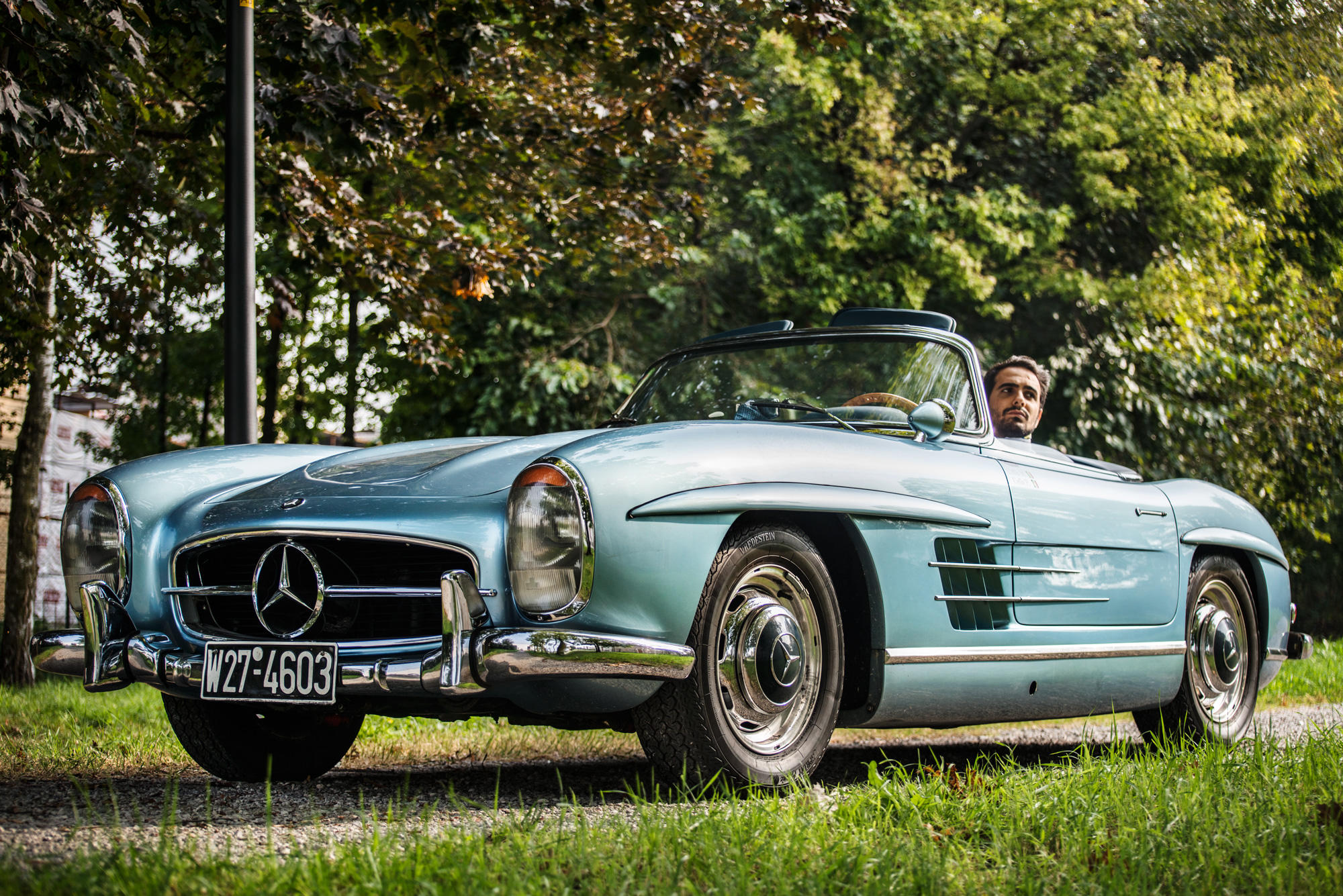 Lettura precedente Braces: style tips on how to wear them like a true Gentleman should
Lettura successiva From design to reality: how the handcrafted travel collection by The Outlierman was born.